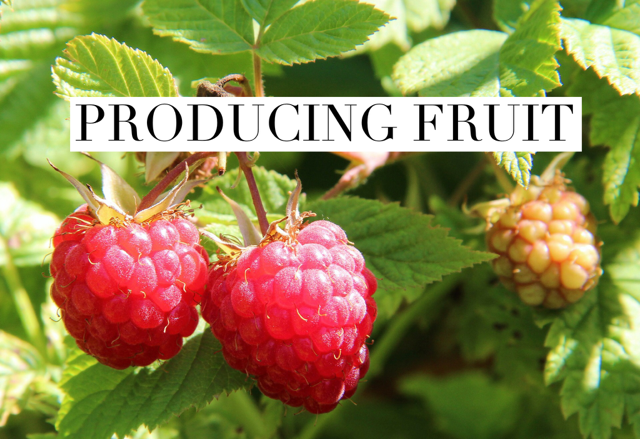 It’s the season for raspberries.

I planted a bush several years ago in hopes that one day my grandchildren could pick them and eat from the bushes in my yard.

That day has come. Yesterday my little grandsons and two friends stood directly in front of my now large raspberry bush and ate and ate and ate. I wondered if I’d ever get them to move from their spots of contentment.

It was a joy to watch.

That once tiny little bush is now a very large bush and produces more raspberries than I ever imagined. It is bountiful indeed.

My dear friend “Dede” is no longer alive, but she lived a bountiful life indeed.

I had the privilege of teaching under her administration for about six years.

Dede passed away several years ago, but I still think back on her impact in my life.

She was a fruit producer in the lives that she touched.

Her children were adults, while mine were in elementary school.

As a teacher in the school, with her as the principal, I would often sit in her office just to “talk”. I might have gone in with a funny story or a burden on my heart, but I always came out refreshed.

She knew so many verses from the Bible by heart and she knew which one I often needed to hear.

She was a dear mentor and a dear friend.

I called her just days before she passed on into eternal life to tell her “thank you”.

She had trouble talking and even breathing for that matter, but I wanted the chance to tell her thank you.

She poured into me for so many years and helped me to grow into a better teacher, a better parent, and a better overall person.

She poured into my children and the many children that came her way as our school principal.

God’s Word would call her a “Paul” in my life,

As someone who mentored me.

He’s certainly given me other mentors through the years, but she stands out as one of the best.

I don’t know what brought her to mind today, but as I think on her, I pray that if you don’t have a mentor that you will pray and ask for one.

It is part of God’s plan that we grow and intertwine our lives with others.

Be ready with a verse of encouragement.

Be a prayer warrior.

I also pray that God will use me and that He will use you in life’s journey to be a mentor to others as well.

There is a whole generation under each of us…what can we pour into their lives?

I’d like to think that I could be a Dede for someone that God brings my way.

Welcome to Reflections - a place where we can open our eyes in the day to day activities of our lives and "see" God in our midst. Sometimes He is tying to teach us something. Sometimes He simply wants to say "I Love YOU" Whatever it is... May He open our eyes to "see" Him in our Day to day
%d bloggers like this: